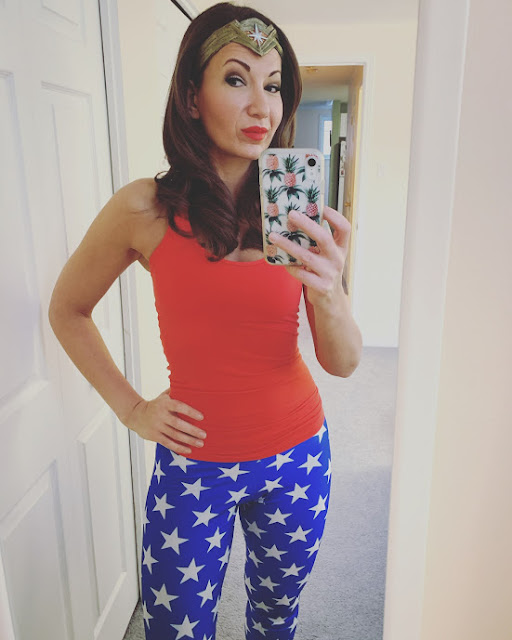 I gave a speech last night.

In some ways this isn't a big deal since I speak regularly at Toastmasters. However unlike my Toastmasters speeches which are 5-7 minutes long, this talk was about 40 minutes. However, as all those who know me can attest, I talk a lot, so filling time is not a problem. (I listen a lot too though, which I feel balances things out.)

I was also speaking to a younger audience than usual, a group of about 30 teenagers aged 13-16, at the Ottawa Boys & Girls Club, which is an organization that helps at-risk children and youth.

This project had been in the works since August. I had given up on getting it going, so was glad that it finally happened.

I did everything I could to prepare for the speech. I focused my content, organized the speech structure, my pace, gestures, vocal variety, visual aids, and my costume. (Who doesn't want to talk to Wonder Woman?)

The talk was about the Hero's Journey, and what a person has to go through to in order to become their own superheroes.

I had written out the hero's journey in nine stages. The title of each stage was printed on a large card that I held over my head and showed the audience at each stage, like the women do in a boxing ring to signal each new round.

After holding up the card for each stage, I read a description of that stage from a "Hero's Journey Story Book" that I had made a mock-up of. After the reading, I told the audience a bit of my personal story as it pertained to that stage and gave them a way that this could relate to them in their lives. I also had one message that I repeated throughout the speech "Your current situation is not your final destination." 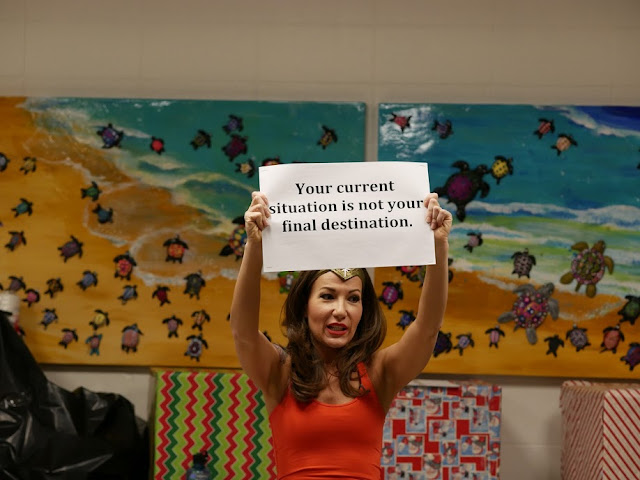 With nine stages, this meant I wasn't stagnant on any topic. I kept a fast pace because I knew that my audience was young and that I had to compete for their attention spans against the fast-paced social media conditioning they had (that we all now have).

All that to say, I really did try to cater a speech to my target audience.

I wasn't nervous at all before the speech. I know that the work I'm doing right now is about me following my purpose. As I was getting ready to give my speech yesterday, I was listening to the theme for Rocky, and telling myself "It's purpose time."

Until my audience sat down.

I looked at them and knew right away that my speech was not at all what these kids wanted to hear.

I found out that most of these kids had been volun-told to attend my speech. I don't care how potentially amazing an activity might be, if you're forced to do it, you're going to be pissed off about it.

Also, they had all been promised pizza, and the only thing standing between them and the pizza was me and my speech. (How am I supposed to compete with that??!)

I also really got in that moment what at-risk youth meant. It's the kids who are growing up in less than ideal circumstances which sometimes causes a certain "I don't give a fuck about you and what you have to say" attitude, along with a general disdain for authority. What I saw last night was, unfortunately, a perpetuation of the stereotype of that particular demographic. The fact that I was dressed up like Wonder Woman and that I have a quarter sleeve tattoo didn't seem to make a difference because I was still an adult to them.

I have never given a speech to a less receptive audience in my life, and I've given a lot of speeches, so that's saying a lot.

The entire back row started collectively rolling their eyes at one point. There were a few face palms. One guy kept falling asleep, and his friend beside him would shake him awake. The four girls in the front row were smirking at me as though they were laughing at a joke, and I'm pretty sure that joke was me.

It was so hard to keep talking, to keep giving my energy and stay focused on my message in the midst of all of that.

The environment also didn't lend itself to having anybody pay attention. My speech got interrupted multiple times with announcements over the loudspeakers. The program staff actually came in during my speech to drop off drinks and the pizzas. People kept walking in and out of the room while talking with zero consideration for the fact that someone was speaking.

I honestly felt totally disrespected - both by the audience and the staff running the show. I'd put so much work into this, I had shown up prepared with an excellent talk, and I wasn't charging for all my time and effort. This is a non-profit organization, so the effort I gave was my way of contributing.

I got a perfunctory thanks from two of the staff at the end, and that was it.

Last night was a great experience because of how great it wasn't. I got a lot of information about what I want to do with my purpose, and who it is and isn't for.

First - and most clearly - this was not my target audience. I likely need to be addressing people at minimum college age, who are starting to ask themselves questions about what to do with their lives, and who are open to hearing people present different options around that. Also, people who actually chose to be there to listen to the content, and not people who were forced to hear it.

It was definitely a very humbling experience. Usually when I start talking, with my level of energy, my stage presence, and my content, the room goes quiet and everyone really tunes into what I'm saying.

But this particular audience wasn’t into it. I’m so used to having an audience on the edge of their seats when I get up to speak, that to have the opposite experience was difficult.

In the entire audience, I noticed only one girl, sitting right in the middle, who was actually focused on me and who appeared to be hearing my words. Maybe that girl will live a different life because of what she heard me say. And if I managed to change even one life, then it's a win.

That being said, putting that much time and effort into inspiring one person - for me right now - isn't time well spent. If I had taken the content and made a video to put on Youtube, instead of taking the time to prepare for a live talk, I could have reached and potentially changed many more lives.

My experience yesterday taught me that I both need and want to focus on where my message can have the widest reach and live talks at this moment in my purpose trajectory, are not a good use of time.

I re-learned a valuable lesson too: we can only control our part of any creative endeavour, and we have zero control over other people’s reactions to that creativity because art and self-expression are subjective.

I’m very proud of myself for powering through; for staying focused and on track to deliver a great speech in spite of the disinterested, disruptive audience full of teenagers. I’m a professional and professionals keep going regardless of how unfavourable the circumstances are.

My purpose is to use my voice to help myself and others emotionally liberate themselves and live more authentic lives.

Yesterday made me more determined to follow-through on that purpose.

Sometimes I forget about the purpose behind my work, and I get caught up in the lack of "likes" or the very low read count on my blog posts.

And then after an experience like yesterday, I remember that unlike the words to the Lady Gaga song, I don't do this for the applause.

I do this because it's who I am. Me writing, me giving speeches, me sharing my pain, my growth, in order to heal myself and potentially help heal others - that's WHO I am. I'm just being me.

Even if no one ever reads another word I write, I will still write.

Even if no one ever listens to another word I have to say, I will still speak.

Because it's who I am.

I love applause. Of course I do. Who doesn't? But it's not why I do what I do.

I do the things I do because I just don't know what I would do with my life if I didn't do this. Nothing else holds the same level of interest, value, and meaning to me.

All I know is that I was born to use my voice to help make my world, and hopefully THE world, a better place.

I couldn't do anything else. I couldn't be anyone else.

It doesn't matter because in the pursuit of what I feel is my calling, I cannot afford for the applause to matter.
Email Post
Labels: FAITH Letting Go Motivation My Story Purpose Real-Life Zen Training Reflections