When There's Only One Side to the Story 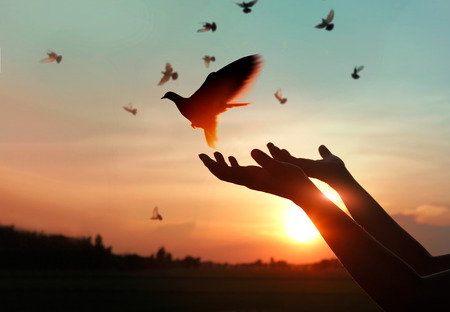 I've alway thought that there were two sides to every story.
Always.
Until recently.
One of my friends (who has a tendency to turn my thinking upside-down in a good way) said something that had the needle scratch on the record in my mind.
It was with regards to my parents.
She said "No, there's no two-sides to what they did; they were just wrong."
Whaaaat?
I didn't realize until that moment that all my life I've been justifying my parents' behaviour; justifying their reasons for the abuse they put me through.
I had tried to explain it: they were abused and neglected themselves and never healed from that which is why they went on to abuse and neglect me.
I had tried to justify it: they're not emotionally aware people. "Forgive them for they know not what they do" and all of that.
But when I heard my friend say -"They were just wrong" - a seismic shift took place within me.
They were just wrong. Because there is no "two sides" to abuse.
There is no rational explanation for abuse.
There is no justification for abuse.
There is no excuse which justifies beating a child, and there is no excuse for turning a blind eye while that child is being beaten.
There is no justifiable reason for that.
None.
They were just wrong.
There is no "two sides" to abuse.
It's just wrong.
It's never ok.
It' never justified.
Ever.
There is only one side to any story of abuse.
During that conversation with my friend, I heard a second needle scratch on the record.
She said "You call your friends to help you cope with the effects of your family. It's not the other way around."
Oh. My. God.
Yes.
All my life.
ALL MY LIFE.
I've been talking to my friends or anyone who would listen about my dysfunctional family.
They took away my childhood, and then I've given away a good portion of my adult life to focusing on what they did to me, and what I am allowing them to still do.
We cannot get angry at people who are sucking the life out of us if we keep giving them the straw.
Mental shift: not "Look at what they're doing to me" but "Look at what I continue to allow them to do to me."
Boom. Mic drop.
I've been in mourning for all of that wasted time; the wasted opportunities for joy because I've been waiting for people to change who simply never will.

But I'm done now; actually done. I'm tired of the topic. Just spent. I got nothin' left.
I am done trying to explain myself to people who are are determined not to understand me.
They will never acknowledge what they did, let alone apologize for it, because it doesn't serve them to do so. The fragile house of cards that their lives and identities are built upon would crumble if they ever acknowledged any wrong doing.
So they won't because they can't.
I've accepted that.
It wasn't easy. (It's still a work in progress actually.)
But it's also created more space within me because there is no more wondering "if" or "when" they might change.
They just won't.
That definite answer leaves me the space to get on with MY life.
What do I want my life to be now?
Who do I want to be now?
Who am I, apart from them, apart from the abuse?
Who do I want to be?
The emotional space I now have means that when it comes to things like holidays, birthdays, etc., I'm no longer wondering "Will I go? Will I see them?"
The answer is simply no.
Definite answers are awesome because they're a solid launching ground from which to make new decisions.
I'm free to come up with my own traditions for holidays.
Thanksgiving is coming up, and I've been asking people if I can invite myself over. "It's ok if I can't come, but I wanted to ask because I don't have anywhere specific to go."
That's another thing I've learned to do recently; asking directly for what I want instead of hoping that people will guess. I've made peace with the fact that people might say no, which has freed me to ask fearlessly and shamelessly.
That feels good.
I'm turning 41 next month and what I've realized is that I don't owe anybody anything. And if I don't owe anyone anything, that means I don't have to give anyone anything I don't want to, especially if it's going to hurt me in some way.
The only way for me to exist in the same space as my parents is to concede to their version of reality; to deny what I went through, and what I felt and still feel when I'm around them.
I can't do that because denying things which I know to be true is emotionally damaging to me. (It's also called gaslighting and I refuse to gaslight myself.)
What is the benefit of me damaging myself for the benefit of any human on this planet?
There is none.
It's time for me to do what's best for me.
I've wasted an awful lot of time being awfully unhappy. It is what it is.
But it's really enough now.
When you know better, you do better.
- Maya Angelou
I didn't really understand the massively damaging effect that keeping the emotional door open for my parents was having on me until I closed it.
There's more space now.
Space to be happy.
Space to breathe, to live.
Space to be me.
I deserve to be happy.
No one ever told me that, but I am telling myself now: I deserve to be happy.
And if no one has ever told you: You deserve to be happy too.
Email Post
Labels: Boundaries Reflections Saying NO Self-Worth Short Posts