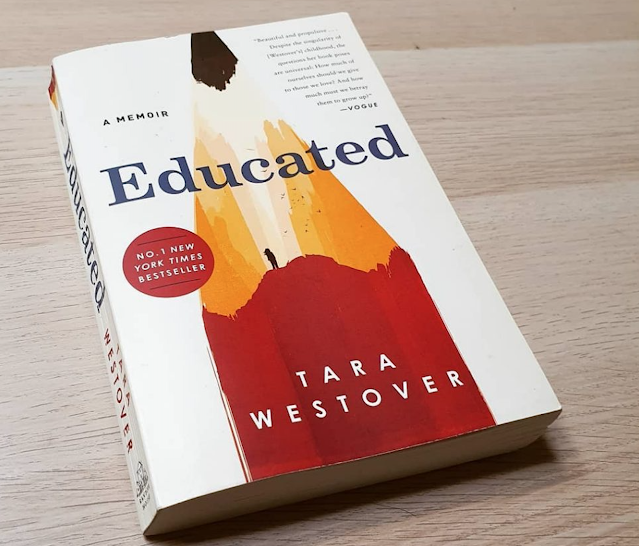 The below is what I like to call intellectual collage: the re-pasting together of ideas from either broad or varied works in order to construct a new narrative.
This particular collage is based entirely on the excerpts from the book Educated by Tara Westover.
The book is a poignant narrative of family dysfunction so unbelievable that it must be real; truth really is stranger than fiction.

I saw myself in Tara's story; she made my crazy family seem almost normal. Almost.

Her story inspired me to continue to keep a distance from my own family; her beautiful words helped me understand that it was and always will be a choice between them and me because there is no room in any family dynamic for two wildly differing narratives.

I am 41 years old. It has taken me until now - until this moment when I finished her book - to finally understand that from now on, I must and always will choose myself over anyone else.

Her book, her beautiful story, has served as a summation of my own journey of healing. As such, I did not feel the need to alter her words; I simply extracted the essence of my own feelings and re-shaped them into what you can read below. Note that all emphasis is mine.
I encourage you to buy her book; to read it or listen to it, as it is one of the most fascinating stories I've ever heard.
My life's journey has been one of loving my family but coming to the realization that they are my scourge. With that realization came the struggle to find my place in the midst of their chaos only to realize there was no place for me.
This book has helped me find a more even footing in the creation of my own life; it was the validation I needed.
I have often wondered if the most powerful words I wrote that night came not from anger or rage, but from doubt: I don’t know. I just don’t know.
Not knowing for certain, but refusing to give way to those who claim certainty, was a privilege I had never allowed myself.
My life was narrated for me by others. Their voices were forceful, emphatic, absolute. It had never occurred to me that my voice might be as strong as theirs.
It’s strange how you give the people you love so much power over you… [My brother] Shawn had more power over me than I could possibly have imagined. He had defined me to myself, and there’s no greater power than that.

First find out what you're capable of, then decide who you are.
Dr. Kerry smiled. “You should trust Professor Steinberg. If he says you’re a scholar—‘pure gold,’ I heard him say—then you are.”

“This is a magical place,” I said. “Everything shines here.”

“You must stop yourself from thinking like that,” Dr. Kerry said, his voice raised. “You are not fool’s gold, shining only under a particular light. Whomever you become, whatever you make yourself into, that is who you always were. It was always in you. Not in Cambridge. In you. You are gold. And returning to BYU, or even to that mountain you came from, will not change who you are. It may change how others see you, it may even change how you see yourself—even gold appears dull in some lighting—but that is the illusion. And it always was.”
I wanted to believe him, to take his words and remake myself, but I’d never had that kind of faith. No matter how deeply I interred the memories, how tightly I shut my eyes against them, when I thought of my self, the images that came to mind were of that girl, in the bathroom, in the parking lot.

I couldn’t tell Dr. Kerry about that girl. I couldn’t tell him that the reason I couldn’t return to Cambridge was that being here threw into great relief every violent and degrading moment of my life. At BYU I could almost forget, allow what had been to blend into what was. But the contrast here was too great, the world before my eyes too fantastical. The memories were more real—more believable—than the stone spires.
Clothes could not fix what was wrong with me. Something had rotted on the inside, and the stench was too powerful, the core too rancid, to be covered up by mere dressings.

I mumbled something about historiography. I had decided to study not history, but historians. I suppose my interest came from the sense of groundlessness I’d felt since learning about the Holocaust and the civil rights movement—since realizing that what a person knows about the past is limited, and will always be limited, to what they are told by others. I knew what it was to have a misconception corrected—a misconception of such magnitude that shifting it shifted the world.
Now I needed to understand how the great gatekeepers of history had come to terms with their own ignorance and partiality. I thought if I could accept that what they had written was not absolute but was the result of a biased process of conversation and revision, maybe I could reconcile myself with the fact that the history most people agreed upon was not the history I had been taught. Dad could be wrong, and the great historians Carlyle and Macaulay and Trevelyan could be wrong, but from the ashes of their dispute I could construct a world to live in. In knowing the ground was not ground at all, I hoped I could stand on it.”
“The most powerful determinant of who you are is inside you,” he said. “Professor Steinberg says this is Pygmalion. Think of the story, Tara.” He paused, his eyes fierce, his voice piercing. “She was just a cockney in a nice dress. Until she believed in herself. Then it didn’t matter what dress she wore.”

“So what are Isaiah Berlin’s two concepts?” the lecturer asked. Nearly everyone raised a hand. The lecturer called on the student who had studied at Oxford. “Negative liberty,” he said, “is the freedom from external obstacles or constraints. An individual is free in this sense if they are not physically prevented from taking action...”

“Very good,” the lecturer said. “And the second?”

“Positive liberty,” another student said, “is freedom from internal constraints.”

I wrote this definition in my notes, but I didn’t understand it.

The lecturer tried to clarify. He said positive liberty is self-mastery—the rule of the self, by the self. To have positive liberty, he explained, is to take control of one’s own mind; to be liberated from irrational fears and beliefs, from addictions, superstitions and all other forms of self-coercion.

I had no idea what it meant to self-coerce.

Emancipate yourselves from mental slavery,

None but ourselves can free our minds.

“I told them I’d been poor, I told them I’d been ignorant, and in telling them this I felt not the slightest prick of shame. Only then did I understand where the shame had come from: it wasn’t that I hadn’t studied in a marble conservatory, or that my father wasn’t a diplomat. It wasn’t that Dad was half out of his mind, or that Mother followed him. It had come from having a father who shoved me toward the chomping blades of the Shear, instead of pulling me away from them. It had come from those moments on the floor, from knowing that Mother was in the next room, closing her eyes and ears to me, and choosing, for that moment, not to be my mother at all.

All I had to do was swap my memories for theirs, and I could have my family.
When life itself seems lunatic, who knows where madness lies?

In the days that followed, I wrote that passage everywhere—unconsciously, compulsively. I find it now in books I was reading, in my lecture notes, in the margins of my journal. Its recitation was a mantra. I willed myself to believe it—to believe there was no real difference between what I knew to be true and what I knew to be false. To convince myself that there was some dignity in what I planned to do, in surrendering my own perceptions of right and wrong, of reality, of sanity itself, to earn the love of my parents. For them I believed I could don armor and charge at giants, even if I saw only windmills.

Everything I had worked for, all my years of study, had been to purchase for myself this one privilege: to see and experience more truths than those given to me by my father, and to use those truths to construct my own mind. I had come to believe that the ability to evaluate many ideas, many histories, many points of view, was at the heart of what it means to self-create. If I yielded now, I would lose more than an argument. I would lose custody of my own mind. This was the price I was being asked to pay, I understood that now. What my father wanted to cast from me wasn’t a demon: it was me.

Mother said I was welcome to come to the house, that she prayed for the day when I would run through the back door, shouting, “I’m home!”

I wanted to answer her prayer—I was barely more than ten miles from the mountain—but I knew what unspoken pact I would be making as I walked through that door. I could have my mother’s love, but there were terms, the same terms they had offered me three years before: that I trade my reality for theirs, that I take my own understanding and bury it, leave it to rot in the earth.

I don’t know if the separation is permanent, if one day I will find a way back, but it has brought me peace.

That peace did not come easily. I spent two years enumerating my father’s flaws, constantly updating the tally, as if reciting every resentment, every real and imagined act of cruelty, of neglect, would justify my decision to cut him from my life. Once justified, I thought the strangling guilt would release me and I could catch my breath.

But vindication has no power over guilt. No amount of anger or rage directed at others can subdue it, because guilt is never about them. Guilt is the fear of one’s own wretchedness. It has nothing to do with other people.

I shed my guilt when I accepted my decision on its own terms, without endlessly prosecuting old grievances, without weighing his sins against mine. Without thinking of my father at all. I learned to accept my decision for my own sake, because of me, not because of him. Because I needed it, not because he deserved it.
But what has come between me and my father is more than time or distance. It is a change in the self. I am not the child my father raised, but he is the father who raised her.
We are all of us more complicated than the roles we are assigned in the stories other people tell. This is especially true in families.
Email Post
Labels: Books Boundaries Reflections Saying NO Self-Worth